What is an Albatross in Golf? 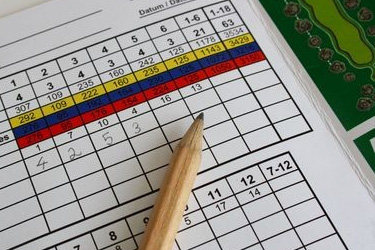 What is an Albatross in Golf?

A Hole-In-One is usually what most golf players dream of achieving. But shouldn't an albatross rank as high, or even higher? In this article, we will delve into how incredible an achievement getting an albatross really is (and what it is). We will also reveal what pieces of evidence we have for when the first Albatross was scored.

(And if you scroll down you will find a video of the Top 10 Albatrosses on the European Tour!)

Is Golf a Good Walk Spoiled or is achieving an Albatross realistic?

Golfers usually allows 2 putting stroke on every given hole, thus for a par 5 that means you will need to reach the green in 3 strokes.

Example: How to make par on a Par 5. (Of course, i.e. 5 iron is only an example, it could be any transport/distance club)

Better than a Par is 1 stroke below par - a "Birdie". In order to achieve a birdie on a Par 5, you have to eliminate one of the strokes in the example given above. Either you

Okay, so far so good. But what if you manage to eliminate 2 of those shots? That's when you get 2 strokes below Par and that is 3 strokes on a Par 5 and this is called getting an "Eagle".

To achieve the eagle you have to eliminate 2 strokes out of the first example!

Just to get you up to speed, and Eagle is achieved getting -2 strokes on any Par. So for a Par 4 you need to complete the hole in 2 strokes.

Well, this Eagle-business seems hard enough. When will you explain the Albatross? As you might have figured out by now, to achieve an Albatross you have to eliminate another of the strokes given in the first example - that is 3 strokes below par. On a Par 5 you have to complete the hole in 2 shots! A lot of good golfers perfect their putting using an "at-home" putting mat.

Just to get the message across I will continue with my first example and illustrate how that would be achieved:

If you are like me, and still don't believe it is possible here is a video of the Top 10 Albatrosses on the European Tour

The first ever recorded  press on an Albatross

Number 5 is my favorite, 230 something yards and no visibility of the flag!

If you, like most golfers, try to get as few strokes as possible getting to know what an albatross is is probably a good idea. Not that knowing what it is and achieving one is the same thing at all. And Albatross is when you manage to get 3 strokes below Par! Thus it's only possible to achieve on either a Par 5 completing the hole in 2 strokes or getting a Hole-In-One on a Par 4. Read our full article to get the full explanation!

Odds of making an Albatross in Golf![or Double Eagle]

High! Or at least if you would ask professional golfers. Dean Knuth, the inventor of the Slope system used in golf, chalked it up to being 1 in a million he told Golf World in an article back in 2004. Obviously, this number would be for the average golfer and for touring professionals who are a bit more inclined to hit the green in 2 strokes on Par 5's, the odds are likely lower.

What is more difficult - A Hole In One or Albatross?

We can instantly separate on which holes that allows you to achieve either a Hole In One or an Albatross.

You are only able to complete an albatross on: Par 4 or Par 5

You are only able to complete a Hole In One on: Par 3 or Par 4 (Theoretically)

To dig into this even further, according to Golf.com that lists Albatrosses in important tournaments, a Par 4 Hole In One (Albatross) is far less common than 2 strokes on a Par 5.

So what is more difficult? I'll let these numbers do the talking:

So to circle back to the initial question - should the dream now be focused towards getting an Albatross instead of a Hole In One?

I'll let you decide for yourself, but I think I'd still take a Hole In One any given day!

When was the first Albatross recorded?

This question is of course not very easy to answer and the information on this topic varies across the internet. One thing that probably correlates pretty high with the achievement of 3 under par is the invention and usage of steel clubs. The old Hickory clubs (that are still used today, but mostly as a gag) could not reach the green on a Par 5 in 2 strokes. The steel clubs exploded in the late 1920s and the in the beginning of the 30s and it really reduced the number of strokes on a typical golf round. 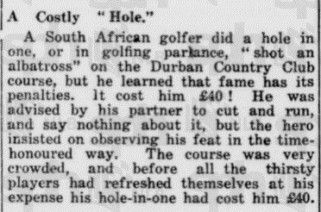 The first ever recorded Albatross is said to be from 1931 when a gentleman by the name of E E Wooler scored a Hole in One on a Par 4.

The achievement then later came to cost the South American 40 pounds in drinks at the Durban County Club.

This was published in The Straits Times 14 Sep 1931 noting a "costly Hole in One".

Wooler was advised by his co-player to scratch the Hole in One but he wanted to take the praise.

What is a Condor in Golf?

Talking about the impossible, the "Condor" in golf is the mythical occurrence of a golfer getting a -4 strokes under Par. If we though an Albatross was impossible, that's nothing compared to a Condor.

A Condor is therefore only possible when scoring a Hole In One on a Par 5 or to get 2 strokes on the rare and occasional Par 6.

Follow the button above to read our in-depth review of Golf Drivers.

What does 460cc mean? Which Driver became our "Top Pick" 2019? Should I keep playing with my old driver?

Follow the button above to read our in-depth review of Golf Putters.

Which shape is the most popular? Which Putter became our "Top Pick" 2019? Am I playing with a putter that is too difficult?

Find out which the "5 Best Golf Apps for Apple Watch" is here!

I have been playing golf for over 20 years and I am crazy about all thing Golf equipment! I'm currently playing TaylorMade M6 Irons and TaylorMade M4 Driver. I just started playing with the Bridgestone RXS Tour golf balls. I currently play on HCP 6 and I'm mostly playing for fun at the moment, after playing some tournaments on the Amateur Tour and in local championships. I have worked part-time with TaylorMade and I really love their products. Send me an e-mail at emma@pineclubgolf.com or leave a comment down below if you want to get in contact with me!